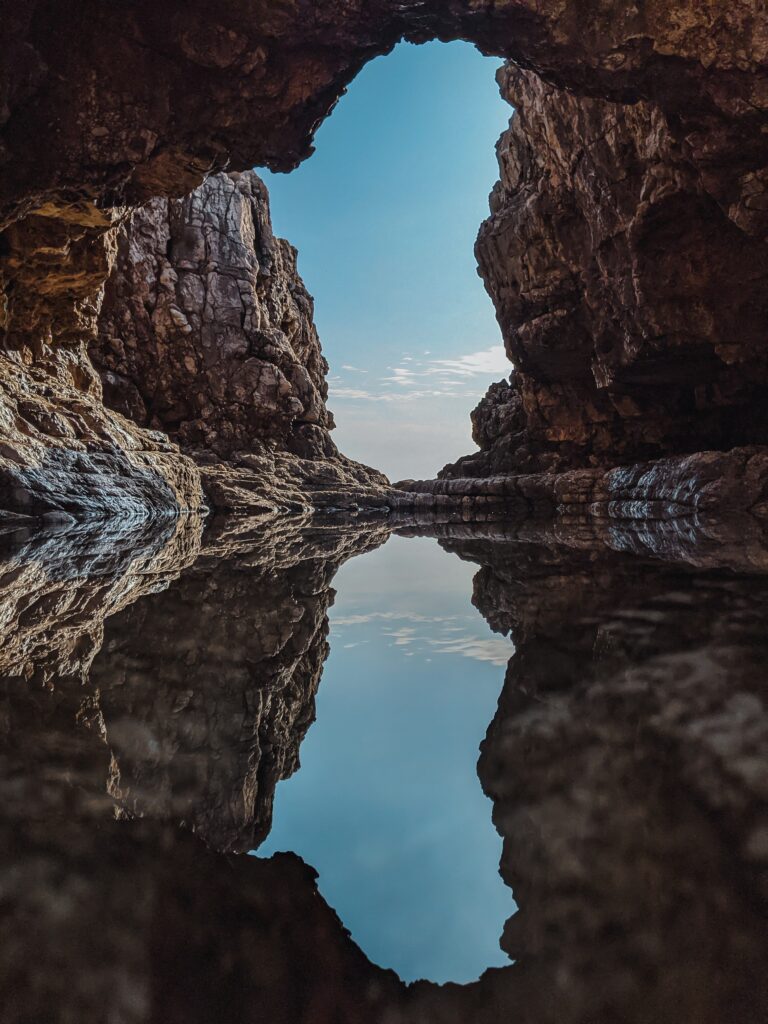 Lokrum Island is located in the Adriatic Sea, just 600 meters away from Dubrovnik City, on its eastern coast. The island, known for its rich flora, beaches, and peacocks, has a lovely contrast to the constant footfall of Dubrovnik City.

The island is ideal for nature lovers and people seeking serenity, away from the hustle and bustle. It features an incredible botanical garden with interesting tropical plant species.

The natural reserve is a popular day trip from Dubrovnik among visitors, especially die-hard fans of ‘Game of Thrones.’ Because it’s one of the filming locations of the epic fantasy show, doubling as the city of Qarth.

So, if you want to recreate your own fantastic ‘Game of Thrones’ moments and sit on a replica of the Iron Throne, come to Lokrum!

The island can be seen from Dubrovnik if you climb Mount Srd or if you walk along the City Walls. YES, it is that close!

Want to get the most out of your trip to Dubrovnik and Lokrum Island?

Check what we have to offer in terms of tours and trips!

How Much Does It Cost to Go to Lokrum Island?

If you prefer taking a taxi boat rather than a ferry to Lokrum, you’ll still have to pay the admission fee, which is 96 kunas.

How Do I Get to Lokrum Island?

Lokrum is a sea-accessible island that can be reached by boat. It takes only about 10 minutes to get there from the old harbour of Dubrovnik!

Daily boat rides are going to Lokrum island from April to November. Just check the boat service timetable while you’re in Dubrovnik to arrange your day trip!

Another way of going to Lokrum is by joining a thrilling kayak tour! That way, you can kayak over to Lokrum and learn so much about the island, with the help of the experienced guides.

How Long Does It Take to Walk Around Lokrum Island?

Walking around Lokrum Island isn’t the easiest of walks, but it’s well worth the effort as you’ll get to enjoy the breath-taking scenery of the Dalmatian coastline. Wandering around the island should take a couple of hours.

Can I Stay Overnight on Lokrum?

Unfortunately, it’s not possible to stay overnight on Lokrum. The island is a natural reserve. Therefore, any sleeping accommodation isn’t available. Even camping is forbidden.

Don’t worry! Remember that Lokrum is just 600 meters away from Dubrovnik! So, you can come as many times as you want until you see all the attractions of the island.

You can stay on Elaphiti Islands though…

What to See and Do on Lokrum

There are many fun activities to do and several attractions to see while you’re on Lokrum island.

The island’s central hub features a lovely restaurant, a bar, showers, and WCs. It even has children’s playgrounds and WIFI service!

Most visitors choose to spend the morning visiting the main landmarks of the island and the afternoon swimming and relaxing.

For your information, the island is a protected reserve. Therefore, smoking is forbidden. So, please take away any created rubbish. Also, accommodation isn’t available, so, if you didn’t have the chance to see all the attractions, you could come again!

The Monastery dates back to the 11th century. It was built in medieval times.

The island was inhabited by monks who warned the Croatian mainland from any potential intruders. Dubrovnik citizens used to know if there was a danger when the Monastery Church bell dingles without stopping, or when they see the fire from the island’s highest point.

Legends state that Richard, the lionheart funded the first Church ever built on this island. After returning from the last crusade, a shipwrecked Richard was cast on Lokrum island.

The horrendous storms surrounding the King’s ships made him vow to build a Church at the nearest land. He anchored at Skalica cove, where all of Dubrovnik citizens saw him.

The citizens welcomed the King warmly, providing him with anything he needed until he fully recovered. And, to thank the citizens for their generous hospitality, he financed the construction works of the Benedictine Monastery, before returning on his way.

At the end of the 18th century, the Benedictine Monastery was totally neglected. Things would have been worse if Maximilian of Habsburg hadn’t bought Lokrum in 1859.

He transformed the Monastery’s ruins into a beautiful summer residence and added a lovely garden with lush vegetation surrounding the Monastery.

The Botanical Garden is located on the eastern side of Lokrum. A walk within the lush vegetation is something you don’t want to miss when you’re on a day trip on Lokrum!

The Garden was founded in 1959. However, the first exotic plants were brought and planted by Maximilian of Habsburg, the former owner of Lokrum.

The Botanical Garden is known to feature a rich Mediterranean flora with giant agaves, olives, and cypress. It also contains exotic plants like Brazilian palm trees.

The Benedictine Monastery was originally built in the 11th century. A legend states that Richard the Lionheart funded the former Church on Lokrum.

However, what we see today is a building complex dating from the late 15th and 16th centuries. The Monastery underwent a series of modifications and reinforcements following the earthquake of 1667. Like any Dubrovnik building, the Monastery was severely damaged, and construction works were done to rebuild it.

In the 19th century, Maximilian of Habsburg built his summer residence just next to the complex and established the very first parts of the Botanical Garden.

The Dead Sea is actually a small Salt Lake located on Lokrum, on the south. (It’s not the middle-eastern Dead Sea, they share the name, though.)

Can you swim on Lokrum Island?

If you want to swim there, it’s totally okay! The waters are shallow, but you’ll have so much fun! It is a popular spot among visitors seeking calmness.

The oval stone well is just jaw-dropping! The Well dates back to the 19th century. Charlotte’s Well was used for watering the exotic vegetation on Lokrum, and for bathing.

Eating and Drinking on Lokrum

Lokrum island is dotted with nice eating places. The island features many restaurants, bars, and cafes, where you can relax, enjoy a light meal or a cool drink. And these are the best eating places you find on Lokrum island:

However, some visitors choose to bring food and water with them and have a lovely picnic within the forest or by one of Lokrum beaches.

It’s an efficient way to save some money and avoid any extra expenses. However, for the full Lokrum experience, the places mentioned above are definitely spot-on.

Verdict: Is Lokrum Worth a Visit?

Lokrum island is a paradise on earth. There’s plenty to see and do there, which is why you should definitely give it a visit during your trip to Dubrovnik!

Do you want your trip to Dubrovnik and Lokrum Island taken care of from start to finish?

Make sure to check our tours around the real-life King’s Landing then!